When I decided I needed more disk space for media and virtual machine (VM) images, I decided to throw some more money at the problem and get three 3TB hard drives and run BTRFS in RAID5. It’s still somewhat experimental, but has proven very solid for me.

RAID5 means that one drive can completely fail, but all the data is still intact. All one has to do is insert a new drive and the drive will be reconstructed. While RAID5 protects against a complete drive failure, it does nothing to prevent a single bit to be flipped to due cosmic rays or electricity spikes.

BTRFS is a new filesystem for Linux which does what ZFS does for BSD. The two important features which it offers over previous systems is: copy-on-write (COW), and bitrot protection. See, when running RAID with BTRFS, if a single bit is flipped, BTRFS will detect it when you try to read the file and correct it (if running in RAID so there’s redundancy). COW means you can take snapshots of the entire drive instantly without using extra space. Space will only be required when stuff change and diverge from your snapshots.

See Arstechnica for why BTRFS is da shit for your next drive or system.

What I did not do at the time was encrypt the drives. Linux Voice #11 had a very nice article on encryption so I thought I’d set it up. And because I’m using RAID5, it is actually possible for me to encrypt my drives using dm-crypt/LUKS in-place, while the whole shebang is mounted, readable and usable :)

Some initial mistakes meant I had to actually reboot the system, so I thought I’d write down how to do it correctly. So to summarize, the goal is to convert three disks to three encrypted disks. BTRFS will be moved from using the drives directly, to using the LUKS-mapped.

Sadly, we need to unmount the volume to be able to “remove” the drive. This needs to be done so the system can understand that the drive has “vanished”. It will only stay unmounted for about a minute though.

This is assuming you have configured your fstab with all the details. For example, with something like this (ALWAYS USE UUID!!)

Note that no modification of the fstab will be necessary if you have used UUID.

Encrypt one of the drives (time 10 seconds)

Pick one of the drives to encrypt. Here it’s /dev/sdc:

To use it, we have to open the drive. You can pick any name you want:

To make this happen on boot, find the new UUID of /dev/sdc with blkid:

Now the system will ask for your password on boot.

Add the encrypted drive to the raid (time 20 seconds)

First we have to remount the raid system. This will fail because there is a missing drive, unless we add the option degraded.

There will be some complaints about missing drives and such, which is exactly what we expect. Now, just add the new drive:

The final step is to remove the old drive. We can use the special name missing to remove it:

This can take a really long time, and by long I mean ~15 hours if you have a terrabyte of data. But, you can still use the drive during this process so just be patient. 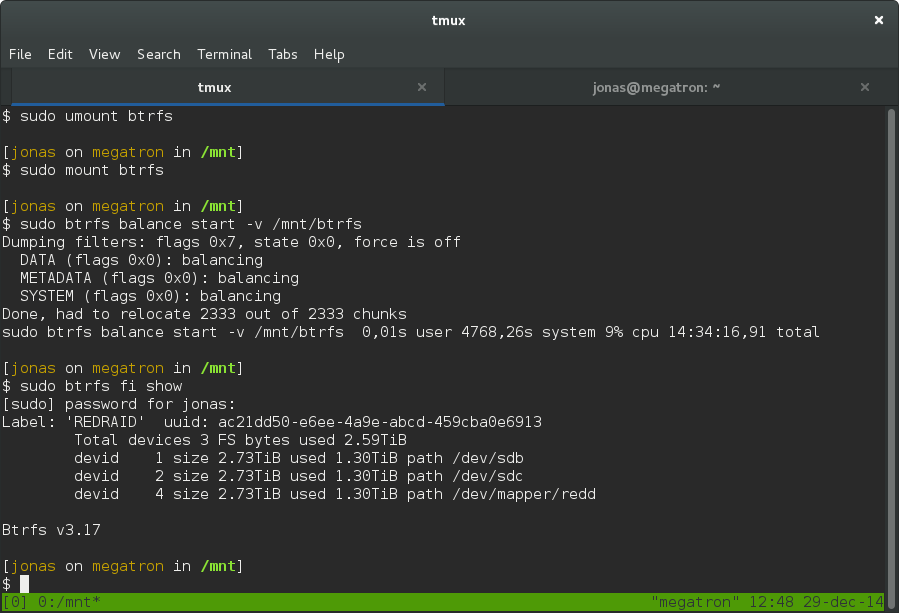 For me it took 14 hours 34 minutes. The reason for the delay is because the delete command will force the system to rebuild the missing drive on your new encrypted volume.

Next drive, rinse and repeat

Just unmount the raid, encrypt the drive, add it back and delete the missing. Repeat for all drives in your array. Once the last drive is done, unmount the array and remount it without the -o degraded option. Now you have an encrypted RAID array.