So I recently migrated this site from Ghost to Hugo after reading a nice article about the Hugo in Linux Voice #20 (funnily enough, the same issue also features an article about Ghost). I originally made the switch to Ghost from Jekyll back in 2014 or so mainly because I could not find a good theme to use. Ghost also seemed to have a lot of cool features and it’s fun to try new things.

I think it’s safe to say that I am hardly a prolific blogger. I mainly write about stuff which I personally cannot find on the web which I think should exist, because I will likely need it myself sometime in the future. So it’s hardly a surprise that I am not in the target audience for Ghost.

Things about Ghost which annoy me

That last point irritates me deeply but it’s not as bad as the next point.

This requires some explanation. So Ghost, targeting teams of bloggers really, naturally have an account system much like Wordpress. Now, as I was surveying the security status of other services I am running, I was wondering how Ghost handled someone trying to brute force your account and decided to simply try it out. Type the wrong password once too many, and this happens: 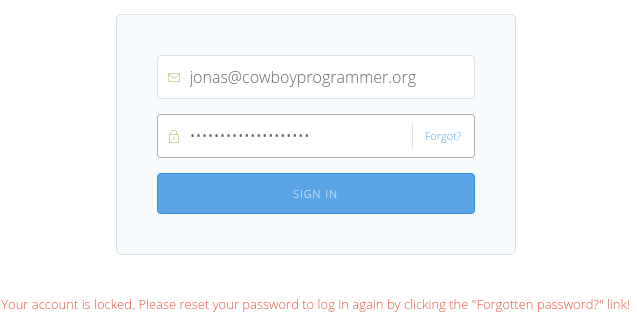 It doesn’t lock it for a single IP address (I tried from several), it locks the entire account. Effectively, someone can just set up a script to try an account indefinitely simply with the intention to block someone from logging in.

The log doesn’t even show login attempts, so there is no way to implement sensible blocking strategies using something like fail2ban.

The whole thing left a bad taste my mouth so it was a very suitable timing to read an article on Hugo.

Things about Hugo which excite me

Migrating all data from Ghost

Migrating from Ghost also turned about to be really painless. There were several scripts around for exactly this but they all turned out to be written in odd languages, and did not actually migrate all the metadata in Ghost. So I wrote my own in Python with these killer features:

Next post, I might write about what changes I made to the theme, and some nifty Nginx tricks you can use to stay compatible with old links.

Other posts in the Migrating from Ghost to Hugo series: