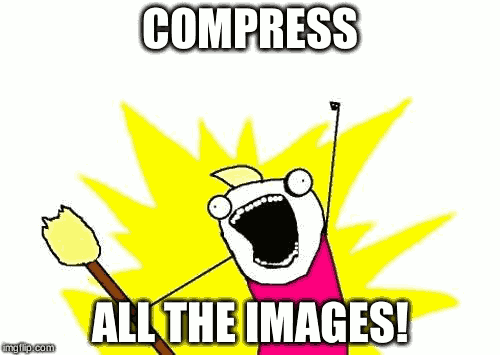 One advantage that static sites, such as those built by Hugo, provide is fast loading times. Because there is no processing to be done, no server side rendering, no database lookups, loading times are just as fast as you can serve the files that make up the page. This means that bandwidth becomes the primary bottleneck, which incidentally is one of the factors used by Google to calculate your search ranking. See also Pagespeed Insights.

Because the largest pieces of a page typically consist of images, it stands to reason that if we can make the images smaller, we can make the page load faster. Luckily there exists methods that can compress images losslessly. That means that the quality stays exactly the same, the page only loads faster. That seemed like a no-brainer to me so I compressed all the images on the site using PNGout as advised by Jeff Atwood. I mean, who doesn’t like free bandwidth?

A new algorithm called Zopfli (open sourced by Google, also mentioned by Jeff) claims even better results than PNGout though. Results on this site’s images confirm those claims. Running the tool on images already compressed by PNGout gives output such as this:

The first result in the example output shows a case where Zopfli would actually have made the file bigger (because it was already compressed by PNGout, remember). This is nothing you have to worry about because it’s actually smart enough that it simply copies the original file in that case.

Comparing to both before any compression, and PNGout, yielded the following results:

Box plot of results on all images: 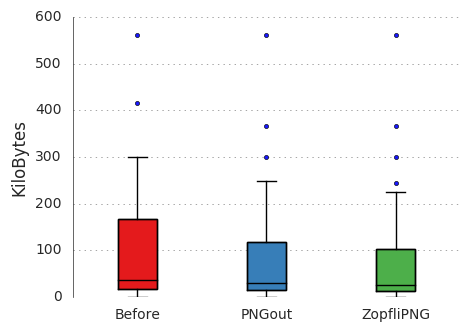 And this is with the default arguments. It is possible squeeze yet a couple of more bytes out of this if you’re willing to wait longer.

Automate it with Make

Another joy of using a simple static site is that it is possible to compose regular tools to do useful things. Tools like Make. And we can use Make to build the site, as well as compressing images which have not already been compressed. You could do it manually for each new image that you add of course but be honest, you know that you’re gonna forget to do it at some point. So let’s automate it instead!

This is the Makefile that I use to build this site with, note that public depends on $(PNG_SENTINELS), so I literally can’t forget to compress any new images added:

Other posts in the Migrating from Ghost to Hugo series: